Mount Gox has failed, Vircurex is failing. Bitcoin is distributed, so what's the problem?

I am a firm believer in Bitcoin. I didn't mine the fraction of a Bitcoin that I own, in so much as it's possible to own a number, or cyptographic keys, in this case. I bought it with Australian dollars though Mt Gox. I didn't trust Mt Gox to hold the currency on my behalf, so I transferred it to a Bitcoin wallet as soon as I was able.

I bought the Bitcoin at an interesting time. It had just started to gain some traction with the online tech media. The plan was to sink enough into Mt Gox to buy a single bit coin, just to say I had one. The short story was that in the days it took to transfer the money across, the currency rose in value so that I ended up with 0.39 bitcoins.

Would I do this again? Not sure, and this is where I think the problem is. Buying bitcoin as an investment is now fraught with the additional issue is that there is a lot more stolen bitcoins out there then there used to be, or coin that has been used illegally. Like banknotes with serial numbers, bitcoin transactions can be tracked, and if stolen, traced through their entire life. An added complication is that bitcoins can be combined together as well, so the question of ownership in the case of stolen coins may end up being diluted over time. Who knows how the legal eagles would interpret all of this. On the other side, I doubt whether the law would also be able to offer any protection if my bitcoin were stolen, even if the thief is identified.

My prediction - Bitcoins long term value will be in its transactions.
Posted by Unknown at 11:51 pm No comments:

Something has gone wrong with my RepRap... 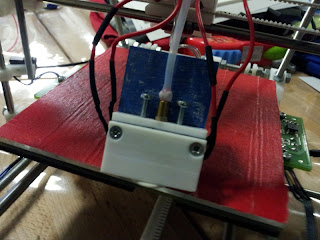 Like a scene out of a cartoon, the feed tube of my Huxley Reprap extruder got a great big bulge in it.

I suspect I got some foreign matter in the feed when I changed over the filament, which blocked the nozzle. Rather than have a look to see what the problem was, when the filement was slowly dribbling out, I let it run thinking (hoping) that it might clear itself. You can see the result.

Maybe it's time to order some spares.
Posted by Unknown at 9:30 pm No comments:

My Anderson Powerpole Connector crisis is over..

After forking out $5 for a single set of Anderson Powerpole Connectors from Jaycar I thought that I would bite the bullet and purchase enough from the US supplier so I wouldn't have to worry about this any more.
I purchased 100 sets from Powerwerx at $0.87 each including shipping, just in time for the Amateur Radio John Moyle Field day. (A previous post about the use for these connectors is here.)

The photo shows the connectors in groups of five, so I could easily count them.
Posted by Unknown at 4:48 pm 1 comment:

This was quite an excitable moment as we have purchased the 3D printer before Christmas as a kit with promises of all the things we could create with it. Since then it has been successfully printing lots of stuff in PLA plastic and I have been able to figure out how to further tune it up and make the prints even better.

A big shout-out to the great guys an the Adelaide Hackerspace who
helped me through the final set of bugs and explained how to effectively use the printing software. (Compose.. then print.) Thanks Pix, Jonathan and Ryan.

The following are some of the items that have successfully been printed.

I need to buy some more filament.

On Monday (20 Jan 2012) I attended a 3D printing and rapid prototyping seminar at the RIAus, organised by the South Australian Education Department (DFEEST). I came along as an attendee and also as a member of the Adelaide Hackerspace. There were three of us from Hackerspace each with our Huxley Reprap machines. There was also a collection of other machines on display with the University of South Australia bringing five Makerbots, lit up in various colours and another commercial supplier.

The morning program of speakers was excellent and the organisers did very well covering the broad range of issues that this technology evokes. The panel and the more practical afternoon session, built further on these ideas. In no particular order:
The afternoon continued with practical examples of how to use this technology, along with some valuable hints and tips (eg. remember to leave a hole if you need to remove material from inside an object). All-in-all and excellent, high quality informational session.

This is probably a good time to have a look at some of the other Amateur Radio logging software that is around.The plan was to have made some modifications to xlog, so that it could be used the John Moyle Field Day (in 2011). Unfortunately this won't be the case, so I'll be using vkcl. This has the added advantage of getting some experience with other logging software, and seeing what features are particular useful.
vkcl is MS Windows based software and is available as a free download from the authors website. It is regularly updated with additional code as the rules for the Australian Amature Radio contests change over time. The author has also included some international contests, as he wants to use the same software with the contests that he is involved in.
One of good thing about vkcl is that the help (via Windows Help File) is complete and the software has features which make it a real pleasure to use during contests.
Posted by Unknown at 11:17 am No comments:

I have been building a couple of Huxley Repraps, one for myself and assisting in building one for the Adelaide HackerSpace.

In order to be able to design things to print I am going to have to get my head around using CAD. FreeCAD looks like it will do most of the things that I need a CAD program to do, so I have spent a some time learning how to use it by drawing up a box that could be used to store, carry and display the finished Husleys. 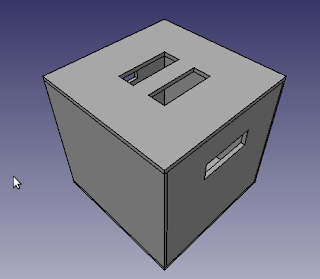 The Huxley will be bolted to the base with the box fitting over the top, similar to a sewing machine case. A method for keeping the base attached to the box has yet to be sorted out, although a sash-clamp/tie-down appears to be the easiest solution.

The inside dimensions are 302x302x302 where the Huxley (according to my measurements) is 295mm high. (So everything should fit... but I need to measure the other dimensions and adjust accordingly... 320mm was a nice initial number to work with.)

I haven't figured out a way to make the circular cuts with the CAD program, so the handle slots are all square.
Posted by Unknown at 11:37 pm 1 comment: